Skip to content
Fall has long been my favorite season. For one, I love the crispness in the air when the weather turns cool, but not cold; it’s time to pull out all the cozy, fuzzy sweaters and slippers and curl up on the couch with a chunky afghan. For two, I loooooove the color that dances through the trees. For three, I am one of “those people” who loves pumpkin spice—not on ev.ery.thing., but definitely in all things baked and sweet and delicious. And for four … my birthday is in the fall. And really, that’s the most important reason.
*
But here’s the kicker … I live in sunny SoCal. And I’ve lived here since I was 8. Before that? Yeah, still California. I’ve lived in this sunshiney state my whole life. But sadly not in the parts that actually GET fall color. Or crisp, cool weather. Or the need for chunky cozy sweaters. “Cool” for us is when it gets down to 70. Most natives pal around in flip flops year round. Sigh.
*
So what’s a fall-color-loving girl to do? When the only indication that fall has arrived is that the calendar page has been turned to September … then October … then November … at which point, we miiiiight finally break into the high 60s. At night. When it’s cloudy. (I know, I’m complaining about living in a temperate climate. My apologies to anyone who has to haul out a shovel just to leave their house during the winter. I don’t know your pain, but I can imagine.)
*
Well, if that fall-crazy girl is crafty, it’s time to break out the fall color … on paper. With ink. And paint. And embossing powders. And sip a warm chai latte with the A/C ratcheted up a notch so it can at least feel cool enough in the house to warrant a warm drink without risk of breaking into a sweat. (But still keep the flip flops on. Because, really. This is San Diego. And it’s 77 degrees outside.)
*
And since I am a crafty girl, and why, yes, I do love a good chai … I made these:
*

*
And how fitting that a fall-colored card should also be one that celebrates gratitude and thankfulness.
*
This set of 3 cards started life from one of those bargain bulk bags of pre-folded cards and envelopes from my local craft store, with the idea of making a small set of one-layer cards, perfect for mailing. But while I was stamping away, and playing with embossing powders, things got a bit … messy. And I noticed bits of color and stray embossing on the insides of my cards:
*

*
Not the look I was going for. But I also didn’t want to just scrap all of the work I had done stamping the leaves in several fall colors, and adding metallic splatters with gold- and copper-colored embossing powders. So I decided to turn the card fronts into panels instead—rather than just chop the card along the fold, I trimmed the front of each card by cutting them down a little less than half an inch from the center fold:
* 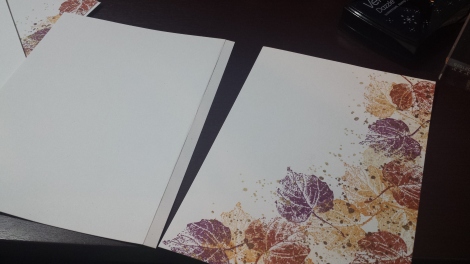 *
And affixed the stamped panels to a new round of pre-made cards from that bulk bag. But I didn’t want to just glue it down—there needed to be an extra touch of something that made that bit of “surgery” look intentional. The idea of adding another layer of colored card stock didn’t appeal, since that would make the front of the cards so much heavier than the backs. So then I had the idea of running a bit of the same copper-colored embossing powder along the left edge, right along the crease—but instead of having a solid line of powder, I used a grungy edge stamp (from the Stampin’ Up! Timeless Textures stamp set) to add a bit of texture and visual interest:
* 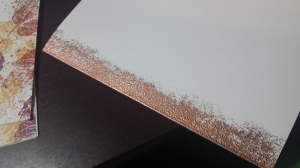 *
I then adhered the panels flush with the right side of the card front. I didn’t bother with dimensional adhesive, especially since these were going to be mailed—I just ran a line of tape runner along each edge and stuck ’em down. Signed the backs of the cards and voila! A bit of fall color for those of us who don’t get to walk around in it.
*

*
Thanks for stopping by!

*
Supplies:
Stampin’ Up stamp sets (cling-mounted)—French Foliage (leaf image); Gorgeous Grunge (splatter/speckle); Timeless Textures (grungy edge)
*
Stampin’ Up ink pads—Rich Razzleberry; Cajun Craze; More Mustard
*
W Plus 9 stamp set—Hand Lettered Thanks
*
Copper embossing powder—from a multipack by Hampton Art
*
Gold embossing powder—WOW! Super Fine Embossing Powder in Gold Pearl
*
VersaMark Dazzle watermark stamp pad in Frost *I like to use this whenever I want to emboss or stamp with metallics–I don’t know if it makes a difference, but just in case it does, since I already have it in my arsenal, I break it out 😉
*
Finished card dimensions: 6.5″ x 5.0″

Welcome to the Dandelion Lane blog!

I have always loved crafts and making things by hand. If a hobby requires the use of paper, scissors, stamps and ink, drawing, ribbon, flowers, paint, beads, yarn, or any combination thereof, chances are that it’s a hobby of mine and I love it. And if I don’t love it, it’s only because I haven’t tried it yet. I especially love taking “trash” and junk mail and things that have lost their purpose or just aren’t the trendy thing anymore, and giving them new life as an upcycled creation.

My vision for Dandelion Lane is that it will give me the opportunity to share my love of all things crafty. Whether it’s a set of handmade cards, or cute hair bows for someone’s lil pumpkin, or my latest experiment with upcycling and mixed media art, I want to share it here with the hope that Dandelion Lane becomes an inspiration for everyone who finds their way here. If something I’ve done has inspired you to make a crafty thing or a piece of art, I would love to see it!

What have I written lately?